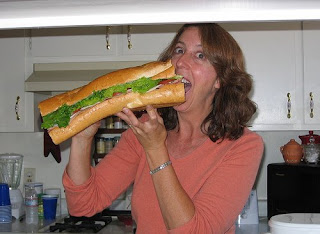 At around 12:30 each workday, the predator begins to stalk. The prey: unsuspecting office workers, simply looking for a quick yet delicious bite to eat. They mill about like lemmings. 'I just feel some thing simple today something like a...' AND THEN HE POUNCES!!!! The Seven Dollar Sandwich.

Like a frog in slowly warming water, the poor lunch-breakers of the world have been taken unaware by this once-innocent lunch staple. And who could blame them? A sandwich was once a reliable choice: a couple pices of bread with some meat, cheese, and maybe some veggies in between. It was a staple that you could order quickly and cheaply, without much thought.

But the sandwich makers were sneaky, and began to take advantage. Their trick (similar to those described in the last post) was to deviously change the names of all the standard sandwich ingredients in order to cause mass confusion, panic, and uncontrollable purges of cash. For instance, instead of good old 'Bread' you now have vaguely foreign-sounding options like Ciabatta, Foccacia, or Lavash. And where we used to have reliable lettuce, we now have to choose between chard, romaine, or even sexy options like rocket. Ooooh! Rocket!

[On a side note, I was recently informed by a friend in San Francisco that some sandwiches there cost $15! I am trying to remove this piece of information from my memory because merely considering the fact that people out there are spending $15 on sandwiches is making me a little bit woozy.]

So what are you supposed to do if this is the going rate for sandwiches in your area? Well believe it or not, you don't have to be Gordon Ramsay to reverse engineer your favorite sanwiches. Just in case you're confused, here is a step-by-step guide:


And finally, I know my fellow Londoners are going to point out there here we don't really have the equivalent of a seven-dollar sandwich. So are all the Pret and Eat drones out here off the hook? Absolutely not. The reason that the local sandwiches here are cheaper is because in America you don't need a microscope to find the sandwich filling. In order to derive the same amount of sustenance out of a Pret sandwich as a Seven Dollar Sandwich back home, you would have to buy three of them and combine all the fillings between two pieces of bread.

You know what, I have better things to do with my time. At least in the US there is no assembly required.
Posted by The Tight Fist at 22:55