This article was supposed to appear in the September 27th edition of The London Student. But thanks to some ridiculous phony 'outrage' to my last post by certain powerful members of student government it has been censored and replaced by a stupid editorial apology. Yawn. Maybe we'll be back next issue.
------------------------ 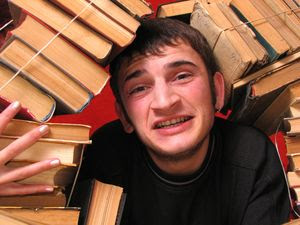 I need a Kindle!

One of the coldest shocks that most first-year students experience when coming to universities is the outrageous price of textbooks. "I've bought books before, this won't be too bad" you say, before keeling over in horror at the outrageous prices at the campus bookstore. But fear not, young student, because with a bit of wisdom you can beat the system and actually have money left over for late night kebabs.

The first question to ask is: do you really need the book? Tons of professors list a textbook as 'required' for their classes, but then go on to not really use it. As a former class teacher, I can't tell you how many times clueless students would come to me in office hours and complain that they "read the entire book but can't do the assignments". Well moron, if you had gone to any lectures you would have realized that the professor wasn't following the book at all. For lots of classes you can skip the book, share one copy with friends, or just pick it up from the library when you need it. But sometimes you'll decide that you really need the book.

There are some things that you want to buy new. These are things that you plan to have a long time and will only wear out if you buy them used. Think trainers, a fancy TV, or brake pads. But something tells me that 10 years down the line you aren't going to be cherishing that nice copy of 'Intermediate Statistics'. No, most likely you're going to try to sell it the second the course is over, provided you can resist the urge to erase it from your memory through ritual burning.

Unquestionably, the best place to get your textbooks is Ebay or Amazon (through its second hand marketplace). But just heading over to these sites is not enough. To get the real textbook deals you have to think like a textbook maker and subvert their shady con of unnecessary editions.

How much do you think the world of basic calculus has changed over the last hundred years? I'll give you a hint: not at all. So why have there been 10 new editions of your favorite calculus text in the last 20 years? Putting out new editions is the way that textbook publishers try to quell the used book market so as to screw over students to their utmost.

Professors will always put the latest edition of their favorite textbook as the 'required' text for their class. At the same time, bookstores will stop selling (and buying back) all previous editions, as they assume there will be no demand. Sellers turn to the internet, offering ridiculously low prices. But the key is that in most cases, there is hardly any difference between the editions! Maybe they've reorganized the chapters and added a couple of color graphs, but don't be fooled: calculus (or pretty much any other subject) hasn't changed.

The key is to go on Amazon or Ebay and look for previous editions of your required textbooks. For instance, anyone taking introductory economics in London is likely to get stuck reading 'Economics' by Lipsey and Chrystal. You can waste your money on the 11th edition going at £39 at Ebay, or you can instead pay £10 for the 10th edition.

A Guide To Partying on The Cheap

New to The Tight Fist? Check out the Introduction to learn more about the site and see some highlights. Also, be sure to follow The Tight Fist on Facebook and Twitter by following the links to your right. 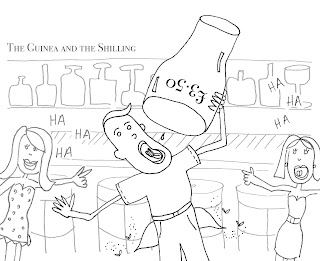 Do you spend too much money? Fortunately, Jews such as myself possess tried and true penny-pinching strategies that have been handed down through the generations. I, The Tight Fist, have taken it upon myself to share my secrets of frugality.

For many of you out there, it's your first week of university- a great time to make new friends, choose your classes, and start expanding your mind. Wait, who am I kidding? We all know you're just going to spend your first few weeks wasting away your new-found freedom in one long drunken stupor.

But unless daddy's got deep pockets (and let's be honest, if daddy really had deep pockets he would have wrangled you a way into Oxbridge), this entry-to-university binge can be pretty damaging on the wallets. Isn't there some way to party yourself silly and still have money left over to buy underwear and instant noodles?

Now is the point where you think I'm going to endorse some of London's many "cheap" student nights at local clubs. Sure, if you going to go out you might as well do it at one of these places, since the prices are usually a bit better than the normal wallet-sucking prices you'd see in a Central London club. (I'd say the £1.50 pints at Sports Cafe on Tuesdays is about the best deal I've seen.) But even if going to some cheap pub, you must follow this golden rule: NEVER GO OUT SOBER. Because no matter what kind of student deal is on, it will always be crushed by your local friendly Tesco.

The trick is to buy some cheap supermarket booze and get as wasted as possible at home (or on the street if you don't mind looking like a hobo.) Then when you hit the bars, you're already toasted and can just nurse one pint all night long. But don't get too pissed, because passing out on the couch will never get you laid. Let's just hope that sneaky David Cameron does not get his way with implementing his ban on cut-rate supermarket alcohol. How about we all revolt if that happens, ok?

Has anyone ever told you not to drink on an empty stomach? THAT PERSON WAS A LYING IDIOT WHO WANTS YOU TO DIE POOR. In fact, you should ONLY drink on an empty stomach. The logic is very clear: you want to get a bit tipsy, eating food means it takes more alcohol to get there, so eating simply costs you money. So next time you are thinking of getting a bite to eat before hitting the pub, just realize that you are flushing money down the toilet. Plus since booze has plenty of calories, skipping dinner prevents you from getting even fatter.

And for the really hard-core Tight-Fisters out there? Try donating blood before a night on the town! Besides being a good public citizen, you will also get pissed for super-cheap!

So there you go, now you can all go get wasted and still have plenty of money for other slightly less important things like food and shelter. Stay tuned for next issue, where we'll talk about how to tackle the bane of any frugal student's existence: buying textbooks.