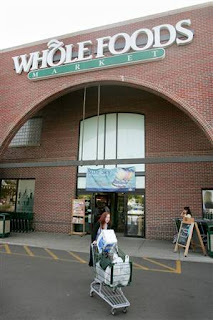 Sorry, I Was Looking For a Half Food
An important clue to easily tell if any product is a rip-off is whether it is described using completely non-informative adjectives. For instance, consider the following boardroom scenario:

Stupid Manager: Gee, we sure aren't going to make much of a profit off of all these dried tomatoes that we need to sell.
Stupid Junior Marketing Guy: Hey, I know, why don't we add a completely useless adjective to describe our product! Then we can totally jack up the price. How about we chuck them out in the sun for a sec then call them 'Sun Dried Tomatoes'?
SM: That would never work! People aren't possibly stupid enough to pay more for tomatoes that were dried in the sun rather than any other way, because there is absolutely no difference.
SJMG: But they will, because they are morons!
SM: Genius! You're promoted!

Yes, completely non-informative adjectives are used in tons of products to trick people into thinking that they are somehow better than other products that don't have these adjectives. But really, you need to just step back and think: do these adjectives give me any more relevant information about the product I am about to buy? If not, you are almost certainly being duped.

The worst offenders in this category are restaurant menus. Every restaurant wants to justify its ridiculous prices by making its dishes look somehow special. For instance, a normal restaurant would serve eggs, toast, and hash browns. But this snooty manhattan restaurant instead chooses to serve:

For 15 dollars! But this helps us get started in spotting some common restaurant menu trickery. Note that all examples below are taken from actual New York City menus.

1. "Amy's Bread" - I mean, who the hell is Amy? For all I know, she is the busboy's dog. Any food named after some random person is not to be trusted.

2. "Natural Beef" - 'Wow, I was expecting to eat a steak made out of Play-Doh! But, they have beef from real cows here? Amazing!' The word 'natural' used to describe food means nothing.


3. "Wok-sautéed greens" - Man, if the pan used to cook these greens was flat instead of conical they would have totally sucked!

5. "Air-Baked Organic Belgian Fries" - This is wrong on so many levels, but I've got a fiver for anyone who can enlighten me on how it is possible to bake in the absence of air.

You will never look at a menu the same way again. Enjoy!
Posted by The Tight Fist at 01:27