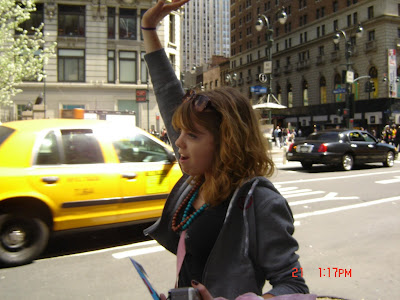 Look Mom, I'm Wasting Money Like A Real New Yorker!
There are few things in this world as that turn The Tight Fist's stomache more than taxi. In most Western cities, modern society has graciously given us public transport, which whisks people around the city cheaply and efficiently. Oh, and I almost forgot: we are also endowed with legs, which are a pretty good way to get around. (My apologies to any readers who don't have legs. You're off the hook here.)

But no, that's not good enough for those rich 'time is money' jackasses. They want their own private, chaeuffer-driven rentals cars to clog our roadways and mow over the proletariat on their weenie bicycles. The rest of us poor, weak souls are then tempted by the constant specter of convenient yet expensive transport.

But surely there are some times when a cab is justified, right? Well, I'm not so sure. Let's take a look at some common situations in which weak people break down and get taxis.

1. I'm drunk and I want to go home! Suck it up big boy, and take the night bus. Plus, if you're drunk late at night far away from home that probably means you already drank this week's paycheck. If you were following the Tight Fist's drinking advice, all your boozing would have taken place before you got the bar, so by leaving time you should be sobered up a bit. But no, you didn't listen to me did you? Way to go. Plus, according to the incredibly disturbing ad that I am forced to watch before every movie here in London, if you get into the wrong cab late at night you are likely to get violently raped.

2. What if I'm at the airport in some weird city, and I have 12 gigantic 17th-century style trunks full of luggage? First of all, if you have more luggage than you can carry you don't deserve to be traveling and I will waste no more time on you. Next, if you're in any developed country there is certain to be public transportation from the airport to the center of whatever city you're going to. And I don't want to hear your whining about jet-lag. Suck it up and get on the bus.

3. I have to go to a very important business meeting. And I'm wearing a suit. There is something about men in suits that makes them think that suddenly their time is the most valuable thing in the world. But we all know that, especially in London, most Suits spend about 20% of their waking hours in the pub, 30% texting to their buddies about how fit the new intern is, and an additional 20% dreaming about being in the pub. So I really think that 10-minute Tube ride isn't going to kill you.

4. What if I'm going to some place so super-secret that no other buses or cars go there and it's really far and it's in the middle of a hailstorm so I can't walk and I have 37 people to pack into the taxi so it won't really be that expensive and oh also this secret place is the most awesome place in the world but it will spontaneously self-destruct if I don't go there right now. Can I take a taxi? Ok you whiner.

Note that one important exception is if you live somewhere where it is not only 44 degrees (Celcius) but also costs under a dollar to get from one side of the town to another in an autorickshaw, doing so is totally justified. (Everyone reading in Ahmedabad can let out a collective sigh of relief.)

But for the rest of you, think twice. Next time I want to spend 10 bucks for 5 minutes of service, I'm going to make sure I get someone a lot better looking than my last cabbie.
Posted by The Tight Fist at 00:00 3 comments: