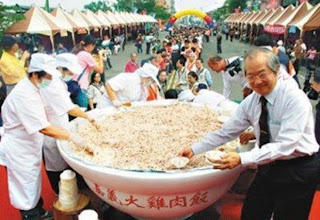 As promised in my last post, I'm going to share my tried-and-true methods of getting full on the cheap.

Let's start with some theory. If you are a small female or some other bird-like eater, it may be pretty easy to eat cheaply, since you don't really consume anything anyway. But for us eaters in the crowd, making sure you can get full is a bit more of a challenge. First step? Discard any notion that a real meal consists of a big hunk of meat. Yes, I also truly love tearing into a gigantic piece of flesh, but if you are rich enough to eat steak every night I would hope you are doing better things than sitting here learning how to be a cheapskate (snorting coke off of a stripper's boobs maybe?) Instead, you are poor, and therefore the base of the meal and the bulk of your calories will have to come from cheap carbs. This generally means rice or pasta, but could also be potatoes, bread, dumplings, etc.


Next, you'll need to make some sort of delicious topping to eat with said carbs. Then, depending on how broke you are, you can adjust the carb/sauce ratio and the amount of meat in the sauce. But remember, the 'meals' below are really just flavoring for the carbs. But it's cool because your carb topping is going to be amazing. Now, for the technique.

A lot of some starch (Rice, Pasta, Etc)
Onions
Garlic
Tomatoes (Generally canned)
Meat (The real tightfist plans what meat to make for dinner on any given night by finding the stuff in the store that is expiring and marked down. Also, for some reason in the UK turkey is way cheap compared to other meats. And turkey is delicious.)
Assortment of Veggies
Some oil
Well-stocked spice cabinet (Yes, I know spices are expensive but cooking is only going to be sustainable if your food doesn't taste like crap.)

First step, saute some onions and garlic in a little bit of oil. Yes, I know we still haven't decided what we're going to make yet, but it doesn't matter. Onions and garlic make every dish delicious. You can always start by making onions and garlic, and then while they are getting nice and soft you can think about what you actually want to make.

From here, you are just steps away from making tons of delicious options. Here are a few examples:

1. Chuck in some meat, mushrooms, olives, and assorted herbs. Then add a bunch of tomatoes and cook down for a few minutes and you've got a killer pasta sauce that whups the crap out of Prego or Ragu.

2. Throw in some meat, tomatoes, cumin, rice, and hot peppers (I use powdered chipotle) and you've got taco/burrito filling. And if I ever see a Tight Fist reader go near one of those terrible 'fajita kits' that the Brits here love, I will punch you.

3. Chuck in some ginger, soy sauce, and a bunch of meat/veggies, and you've got stir fry. (Another note to the brits: Please, please, please do not destroy your stir-fry by adding one of those ever-popular 'stir-fry sauces' to your meal. Just look at the label- they are like 70% sugar! And they taste like crap!)

5. Chuck in some meat, tomatoes, beans, hot peppers and some water: Welcome to Chili-Town.

There are tons of other things of course, but you get the idea. If it doesn't taste too good, add more spices and salt- salt makes everything taste better.

All of these options take under half an hour to cook, cost less than a couple bucks per person, and leave a maximum of two pots to clean.

And a final note, because I know some of you out there are thinking it: but what if I'm trying to fit into a size 3 in time for bikini season? Then I can't eat carbs like you say, right? Wrong. You lose weight by eating less. So just eat less. (Note: Eating less also saves you money.) And stop taking the freaking elevator!

Man, I'll bet I could write a fantastic diet book.
Posted by The Tight Fist at 22:48