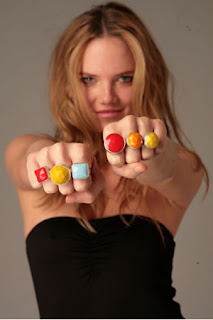 Bling Bling!
Let’s say that an evil, gigantic corporation decided one day to buy up all the supplies and sources of a relatively pretty and relatively uncommon rock such as turquoise. Now that they had cornered the market for turquoise, they could sell it for any price they felt like, as long as they could find buyers. But while we all know that idiots love to shell out tons of cash for shiny, useless things, they certainly weren’t going to pay hundreds of dollars for a tiny grain of turquoise. So what is an evil corporation to do?

Hey, here’s an idea- what if they launch a sophisticated decades-long marketing campaign exploiting the most sensitive of human emotions: love. If they could somehow just convince people that buying turquoise was the only way to find true love, then people would pay hundreds, even thousands of dollars for the opportunity!

Oh that’s impossible, you say! People are way too savvy to be tricked by the relentless marketing of a gigantic company! If you really think that, I certainly hope that you have been living in a cave your entire life, because otherwise I would be tempted to call you an ignorant moron. Don't forget that there are millions of idiots out there just desperate to waste their money, and they are thrilled when society gives them an excuse to do so.


Still unconvinced? Well, for the especially slow members of the audience, this is of course more or less the story of how DeBeers has manipulated the diamond industry for decades. Let’s just get straight about one fact: there is absolutely nothing special about diamonds or other ‘rare’ gems. Sure, diamonds are pretty hard but last time I checked most people don’t try cutting through steel with their engagement rings. Diamonds are only expensive because diamond cartels restrict supply while somehow convincing wives to be everywhere that their suitor is not serious unless they fork out three months’ paycheck on a rock.

Let me guess: you think that people (brides to be included) just want pretty jewlery, and fancy gems are the only way they can be really, really incredibly good-looking? Wait, have you been living in a cave as well? Because here in the real world you have to be a professional jeweler with fancy magnifying glasses and years of training to tell the difference between real gems and fake ones. And why do jewelers need fancy magnifying glasses and years of training to real gems and cheap knock-offs? BECAUSE THEY FREAKING LOOK EXACTLY THE SAME!

This is especially clear in the case of synthetic diamonds. Relatively recently, labs became able to produce synthetic diamonds that are chemically equivalent to real ones. Jewelers had no way to tell the difference between mined and synthetic diamonds, and DeBeers began to freak out. So DeBeers invented a machine that they give away to jewelers that can tell the two apart. See, the problem is that synthetic diamonds are too perfect, and their complete lack of imperfections gives them away. So of course DeBeers was able to convince jewelers that these weren't 'real' diamonds and therefore don't express 'real' love, so the 'real' ones still have a price premium. Ugh.

But let's be honest: not many men out there, especially if love has made them loopy in the head, are going to risk screwing up their engagement just to make a point. But I'm convinced we don't have to stand for it; I'll tackle this subject in The Tight Fist Engagement Proposal, coming out shortly.