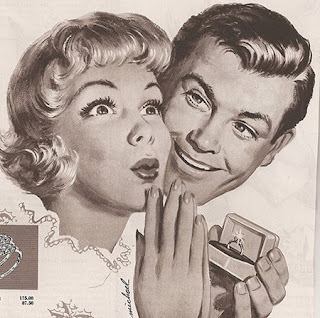 This Big Ring Means He'll Never Leave Me!
As mentioned in the previous post, Tight Fisted men who are hoping to get engaged are in a bit of a conundrum. While they know that dropping a bazillion dollars on a shiny rock is completely idiotic, they know that their fiance-to-be has been brainwashed into thinking that serious proposals must come with a fancy ring.

Let's take a second to drive home the seriousness of the brainwashing drivel that gets pounded into young girls' heads from the moment they hold their first doll wedding. I present a quote from Jef Van Royen, a senior scientist at the Diamond High Council, the official representative of the diamond industry in Belgium. He says "If people really love each other, then they give each other the real stone. It is not a symbol of eternal love if it is something that was created last week." So, that pretty much sums it up- love is officially only valid if it comes wrapped in a huge, extravagant purchase. And I mean, if you can't trust the Diamond High Council, who can you trust?

So what can the poor tight-fisted lovers do? Well, there are two straightforward solutions. If The Tight Fist had his way all the men in the world would sign a pact refusing to ever marry any girl who requested a diamond ring, which would jolt a bit of reason into a generation of females. Unfortunately, I fear that this would probably be unsustainable, as I have witnessed the most reasonable men among us break down when it comes to engagement. Even easier would be for the Tight Fisted men to just find a sensible girl who doesn't care about having a bank-breaking ring. But of course, this is easier said than done, since even if the girl has nice intentions she will still be subjected to years of catty whispering about how she has the cheap husband who wouldn't even shell out for the real ring. And finding a girl who is ok with that is pretty tough.


In order to come up with better solution we need to analyze the psychology that drives couples towards stupidly expensive gems. First of all, the man wants to show that he is serious and committed about the whole marriage thing, and sends a signal by wasting a ton of money. (In economics, we would call this signaling by ‘money burning’.) Second, the woman needs to be able to re-transmit this signal so that she can show to all her catty friends that her fiance loves her carats and carats above their stupid boyfriends. I'm going to work under the assumption that these two elements are crucial, non-negotiable facets of engagement in our society.

Since the money burning signal is a central part of the equation, it is inevitable the the man is going to have to spend some money. But he certainly does not have to hand over this money to greedy, evil DeBeers. Instead, what if he gave it to his fiance's favorite charity, and the amount of money he gave was coded onto the ring? For instance, let's say there was a standard that each carat of cubic zirconium (or maybe some more specific subset of fake diamonds) equaled a $1,000 donation to charity. Then, the size of the ring would still demonstrate how deep was the man's love, and this signal would still be easy to show off to all the wife's catty girlfriends.

How could this be implemented? Well first there would have to be a selection of a certain type of beautiful-yet-cheap gem that would be generally recognized as being tied to donations. Next, charities could provide special certificates for engagement donations that could provide 'proof' of the donation. Reputable jewelers would need to see this certificate before they produced a ring with the special stone. While there would be some scope for cheating, there is no reason to think it would be more widespread under this system than in the current one. (A sneaky husband can always try to pass off a fake diamond as a real one, but I would guess this is rare.)

And what if the bride-to-be doesn't have a favorite charity? Well, then the husband could always just donate to the default option: The Tight Fist Foundation, a truly angelic organization committed to ending the scourge of money wasting.

In the end, however, such a scheme will only work if women sign up for it and let their potential fiances know that they expect a 'Modern Engagement'. Are there women out there courageous enough to be trendsetters? Ladies, who's on board?
Posted by The Tight Fist at 14:20