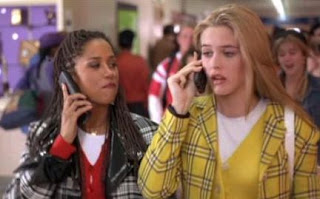 Back in prehistoric times (ie the early 00s), there was an important transition in society that made is virtually impossible to live life without a cell phone. Basically, everyone you knew now had a cell phone and therefore gave up age old practices like making plans, meeting places at certain times, talking at normal volumes, etc. If you didn't have a cell phone you were going to be ostracized, and every time you used an archaic signaling mechanism such as a doorbell people would just open their windows to point and laugh.

This transition put Tight Fisters in a tough spot, because you couldn't just buy a cell phone and use it every time you encountered a broken doorbell (at least not in the US). Instead, the evil cartel the ran the cell phone industry made sure that the only way to get access to their fancy wireless communication devices would be to sign up for a two year contract at some ungodly rate. We were all screwed. (And no, I don't have any evidence to back up that cartel claim, but I can't figure out any other explanation as to why pay-as-you-go cell phones came to America 10 years after they were the norm in the rest of the world.)

But people, open your eyes, because the world has changed! Finally, the cartel has been broken and even in the backward USA you can get a pay-as-you-go phone. So DROP THAT $50 A MONTH CHARGE, NOW!


But hey, there's more to this- because I'm sure some of you are crunching the numbers and coming to the conclusion that your paid plan is actually cheaper than it would be if you switched to pay-as-you-go. Who the hell do you think you are, Paris Hilton? Because the other great thing that has happened to us over the past few years is that the internet is now everywhere and has completely supplanted all needs for a phone. Just take a moment to think about the percentage of your white-collar life that you spend within a few meters of the internet- probably around 80%. So, here is a simple rule to go by: If you have access to the internet, do not use your phone. Using a myriad of services, you can call/chat/videoconference/sext, or whatever it is that the kids are using their phones for these days, all for free (or at least very cheap).

In the UK (and most other places, as far as I know), where Tight Fist friendly norms dictate that you never pay for incoming calls, this can drastically slice your cell phone bill. Then you can save your phone for important things- like drunk dialing your ex. However, in the US you still may be faced with tough decisions like whether or not to answer the phone when your chatty girlfriend calls you- what price can you place on the wrath of a significant other? But fortunately, technology comes to the rescue again in the form of Google Voice. This way you can make sure that calls get forwarded to your computer (using say, SkypeIn), meaning you always have the option of using a computer if you are near one. Awesome!

And finally, what do I have to say to those of you who want to pay $70 per month for one of those fancy 'smart' phones so that you never are away from your precious internet? Well congratulations, you have just paid $70 to make sure that you can settle bar arguments and ruin everyone else's fun by cheating at the pub quiz. Thanks, asshole.
Posted by The Tight Fist at 22:18