5 Rules To Save Food From The Landfill 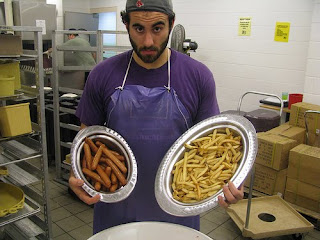 Hey, here's a great idea. Let's buy stuff just so we can throw it away! According to this random article article in the New York Times, Americans waste roughly 27% of the food available for consumption.

Now I know nobody tries to waste food, but a true Tight Fister will take extraordinary measures to ensure no food goes to waste. Remember, any food that you stop someone else from wasting (by eating is) is free food for you. Double score! But I think you could use some more specific advice. Here are five ways to stop wasting food, and save a buck in the process:

1. Watch Over Your Fridge Like A Hawk: Make sure nothing ever rots or gets moldy. Everyone makes the occasional mistake, but you need internalize the seriousness of this offense. Letting meat rot means you killed an animal for fun. It's like drowning a puppy with your bare hands for the pure thrill of it. Think about it. You can avoid this horrible fate by keeping tight watch over your fridge and ensuring that you make food preservation a priority. Feel like a hamburger tonight? NO DICE! Because you have two pounds of spinach that are going to go bad, so it's all spinach all the time until it's gone. And don't be afraid to use the freezer. It there's any risk, chuck it in there.

2. Take One For The Team: What if you're at a restaurant and, although you've joined the clean plate club, your picky 'friends' are getting ready to throw their food away? Are you off the hook? NO! The moment your idiot friend decides to throw away their food, it is then technically your responsibility. No Tight Fister should ever turn down free food. But you can prepare for this situation by identifying early that you are with weak eaters, and order less food in anticipation of the free bonanza to follow.

3. If It Is Edible, You Had Better Eat It: Hey, you think you're too good for pizza crusts? Or the bottom of asparagus? Or those tasty morsels of chicken buried deep in the carcass? Or an apple peel? What, you don't like the bread ends? STOP BEING SUCH A FREAKING PRISS! You have no right to waste precious calories and nutrients just because you are picky.


4. The Sneak Attack: What if you're at a restaurant and you realize the moron next to you left his fries or whatever untouched? Well, unless he was showing visible symptoms of swine flu, POUNCE ON IT! And for all of you who will try convince me that this is dangerous and unsanitary, just realize that this is far less dangerous than making out with all the skanky chicks/dudes that you meet on a night on the town. And far more nutritious!

5. Extra Catering Means Free Food For A Week: You know who loves wasting food? Caterers! If you are at a catered event and there is going to be food left over, this is a classic crisitunity. Yes, you have a big task in ensuring that all the food is not wasted, but there is big bounty to be had! In general, you shouldn't ask the caterers if you can take the food because they may give you some crap about health and safety regulations. Instead, just get a big tray, pile on as much as possible, and hoard it away somewhere safe.

And what of the complainers who say that following these rules is silly because they don't need to eat much food? Well, you have to remember this: the human body is an extraordinary energy storage machine! If you eat too much food at one point in time, your body is smart enough to store this energy for you (usually using some free space around the belly) for future use. How awesome is that! So as long as food is ever available, you can stuff yourself silly and feel satisfied that you are just building up your reserves for potentially lean times ahead. Now we're saving money, cutting out waste, and insuring ourselves against future starvation, all in one go. Now there's a plan I can work with!
Posted by The Tight Fist at 13:00