Tight Fist Tip #26: You Smell Fine Without Perfume and Cologne 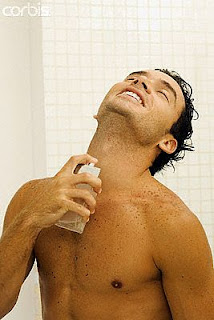 Yeah, This Guy Is Totally Getting Laid Tonight

For some types of products, like say a car or a computer, in theory an advertiser's job is pretty straightforward: you make some ad that stresses the features, quality, or price or your product, and maybe combine it with some gimmick like a semi-nude female or flashing colors and call it a day. But the problem is, this technique relies on your product having some type of defining feature that can be seens as 'better' than its competitors. In other words, you need to rely on some objective measure of quality. But what if you product has no objective measure of quality? Well, this is where advertisers need to get especially tricky, and where Tight Fisters need to be especially vigilant. One thing marketers can do is try to invent objective measures of quality by inventing new words, such as I wrote about with the wine industry.

But the perfume industry has a really unique task. When they come up with a new scent, it basically smells just like a million other products out there. I mean, how many variations of 'chemical-flower' or 'chemical-musk' can you really come up with? (As a side note, natural musk is derived from a gland near the testicles of a certain type of deer. Mmmm, deer testicles.) Also, flowery oil is pretty cheap, but companies want to charge a bazillion dollars for their smelly crap.
So, in order to launch a 'new' product they need to come up with some fancy marketing wizardry to convince the public that they have gone to far reaches of the earth (ie their lab in Indiana) to corral a scent so incredibly desirable it is like nothing you've ever smelled before. In fact, not only is this scent totally amazing, but it is so incredibly great-smelling that it will be like putting your nose on crack, and that everyone in a 50-mile radius area will want to simultaneously copulate with you. And also, it will make you smell just like...Celine Dion!

Wait, what? I don't know who the genius was that first decided it was a good idea to market perfumes by branding them with celebrity names, but thanks to them you can choose which celebrity you want to channel any given night. Is tonight an Usher or Carlos Santana kind of night? Oh, the tough choices we face in the modern era!

So with all these choices, how is the Tight Fister supposed to choose? If that is your question, you have not been paying attention, because only a complete idiot would waste their money by buying smelly oil to smear all over themselves. Look, if you smell bad TAKE A FREAKING SHOWER. Then you will smell fine- see how easy that was? If you somehow think that covering up your nastiness with a strong dash of cologne is going to get you laid, you are in for some serious disappointment.


You would have to be a complete idiot to think that wearing P Diddy's scent is going to help you score, but it would of course be a different story if the commercials told you otherwise, right? I mean, why would commercials lie- no way they could get away with that! Well, that is the tack taken by the whiz-kids who run Axe Body Spray. Supposedly, mysterious 'sex pheremones' present in this cologne have super powers make women wet their pants at one whiff.

Never mind that scientist still don't really know whether pheremones are present in humans or what role they play. I'm sure those guys at Axe have it all figured out. But what's really interesting is that, according to wikipedia(for what that's worth), human sex pheremones are theorized to be secreted by men's armpits. So of course, the proper technique to attract women at a club is to use deodorant to block out all your natural pheremones, and then rely on the incredibly amazing synthetic ones that they put in Axe. Right, great idea.

And finally, if the desire to waste money on smelly water in fancy little bottles is just irresistable, at least don't throw your money down the toilet just to buy a smell endorsed by a celebrity or some brand. Instead, go for one of the knockoff 'smells like' fragrances. Really, these things smell just as 'good' as anything out there and cost a fraction of the price. No one will ever know the difference, and even if they do no one with any intelligence will care. And if you want to pull an extreme Tight Fist move, just hit up a free sample at a department store before you head out. It's still stupid smelly water, but at least it's free!