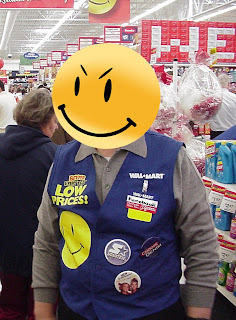 This post introduces a new feature here at The Tight Fist entitled 'Epic Feats of Frugality'. This feature is meant to honor those Tight Fisters out there who are truly inspirational with their frugality, and to spread their stories. Do you know of an Epic Feat Of Frugality? If so, make sure to let me know so I can spread the legend.
------------

If you've even been to a mall in middle American around Christmas time, you have probably notices the preponderance of specialist carts selling all kinds of crazy crap that no one on earth should ever want or use. But if you paid attention, you may notice that some of these stands selling strange, exotic products are staffed entirely by Israelis. Now, what would a group of Israelis be doing in Middle America around Christmas? That's right, scamming hapless Christians desperate to fulfill their utterly useless and wasteful gift-giving traditions!

But look, I'm not here to pick on the Israelis hawking overpriced crap to mall denizens, because the whole purpose of malls is to sell overpriced crap to gift-giving idiots, so really the Israelis are no different than any of the shopkeeps. Instead the truly inspirational part of the story is how the Israeli carts run their operations to maximize profits. This is the story of a mall-cart operator named Gozzle, and how he turned aromatherapy pillows (!) into big bucks.


Gozzle knew he had a great business idea: selling aromatherapy pillows that he bought at about a dollar each to innocent Midwesterners who were just dying to be convinced that smelly pillows are worth 50 bucks. But staffing the stands was an issue. Since the strategy was to sell the products at whatever they thought the mark would pay, he needed good salesmen. And to align incentives and keep costs down, he wanted to pay only commission. To do this, he certainly couldn't hire Jonny Jones from down the road. So why not import some smooth-talking Israelis with promises of easy money reaping the fruits of Christmas? Great Idea!

But this idea had one problem: to entice the Israelis to spend six months in crappy Missouri, he had to hook them up with a phat pad. And the place needed to be furnished so his workers were comfortable. Now, if this was a long-term business he'd be fine, as the furnishing costs would be inconsequential in the long run. But this was just a six-month pre-Christmas operation, so if he bought new furniture for three apartments this was going to erase all his profits.

Enter the Tight Fister's favorite soul-crushing corporate entity: Wal-Mart. In an effort to seem warm and fuzzy to its customers, Wal-Mart has a very generous return policy: "Everything in the store can be exchanged or refunded with a receipt within 90 days of purchase." So, the obvious strategy is to just buy all the furniture and return it when you're done. But you see, it's not that simple, and this is where the genius enters the picture. Wal-mart has a 90 day return policy, but Gozzle needed the things for around 180 days. So what did he do?

Well, our hero decked out his employees' apartments with all the latest furnishings from Wal-mart (and also some stuff from Target and Costco, which have similar return policies). We're talking beds, mattresses, dishes, towels, blankets, stereos, flat screen TVs, etc. Everything. He kept all the receipts and packaging, and also a careful list of what he had purchased. After 90 days, he packed up everything, drove back to the local Wal-Mart and returned it all, for full refunds. Wait, did they really accept mattresses and bedsheets that had been slept on for three months? Sure! What about the microwave that was completely crusted over with three months of food nastiness? You bet!

Then, after visiting the returns department of the Wal-Mart, Gozzle proceeded to walk directly back into the Wal-Mart, and repurchased all the same items he had just returned. Every single item he had just returned, but brand new. On the same day. From the same Wal-Mart. Who was going to notice? He then drove home and refurnished the apartments, and after another 90 days, the operation was over and everything was returned again.

Gozzle made out like a bandit, making huge profits off of his incredible aromatherapy pillows. And is anyone in the crowd shedding a tear for poor, abused Wal-Mart? Gozzle, on behalf of all Tight Fisters out there, I tip my cap to you sir. You are a true inspiration to us all.
Posted by The Tight Fist at 14:09