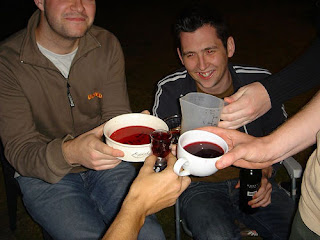 Are They Drinking Wine From Non-Wine Glasses?
Holy Crap, Call The Cops!

As our 'Stop Buying Crap You Don't Need' series has already paid a visit to your closet floor (Tip #2) and the bathroom (Tip #16), you had to know that your kitchen couldn't be too far behind. If you walk into most kitchens (at least those of people who actually cook), they will be filled with drawers and shelves just full of random crap. Now, the owner of this crap will certainly assure you that each gadget has its special purpose, and without it certain specific tasks would be inexplicably difficult. "But how am I supposed to cut my hard boiled egg without an egg slicer? And How could I possibly peel my banana without a banana peeler? And if I didn't have my 76.8g pancake flipper, then I would never be able to flip pancakes that weighed 76.8 grams!" And so forth.

I could list about a million useless kitchen items, but I'll just focus on a few that I have recently encountered.

Electric Can Opener - Oh, the joys of elecrification! To think that back in the stone age people had to expend precious calories turning the knob on manual can openers. Fools!


Lemon Juicer - Of all the useless appliances, this one is the most baffling. At least most of this crap at least does a decent job of doing whatever it was designed to do. But the lemon juicer, I don't even have a clue what to do with. Do I just jam it into the lemon and start twisting? That just seems ridiculous. I'll stick with a fork, thank you very much.

Honey Dipper - Yes, the rumors are true. If you ever try to serve honey with a spoon, as opposed to a certified honey dipper, the honey will revolt and attack you in the face.

Salad Tongs - You see, salad tongs are just like big spoons but flatter. The reason is that if you dared to use two normal big spoons to serve salad, you would never get to eat anything because all the salad would be lost in the bottomless crevice of the spoon.

A ridiculous selection of glasses: Believe it or not, one glass can be used to hold juice, water, or even wine! In fact, if a glass can hold one liquid, it can hold anything! In-freaking-credible!

Bagel Slicer: When untrained gentiles discovered the deliciousness that is a bagel, they were drastically unprepared for the ever-so-slightly elevated risk of cutting their hands when cutting a bagel as opposed to cutting anything else. So they turned to an age-old solution to all their problems: Buy Useless Crap! Any Jew who owns a bagel slicer should be especially ashamed.

Man, I feel like I'm just getting started- there are so many easy targets! But I think you get the point. And one note: I know many of you are going to use the excuse that the useless crap was just a gift, so it is not really your fault. This is never a valid excuse because by accepting gifts (and most likely reciprocating, unless you are a total jerk) you are participating in the gift culture that generates mountains and mountains of useless crap. But I'll get more into terribleness that is gift exchanging sometime in the future.