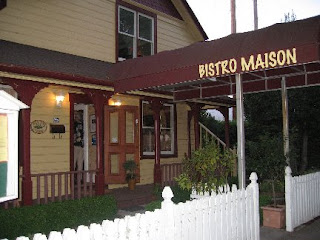 Bar House?
Normally, if you are in the US or some other English-speaking country, you expect most text you encounter to be in English, even if it is talking about some foreign item. For instance, if you go shopping for furniture at Swedish IKEA (which by the way, The Tightfist does not approve), you expect to find signs for beds, shelves, and tables, not sängar, bokhyllor, and tabeller. And if I go to a Greek restaurant for some chicken, I expect to find 'Chicken' on the menu, not freaking κοτόπουλο. I know that this doesn't hold in some immigrant neighborhoods for valid reasons, but that's beside the point.

However, walk around any fancy neighborhood and you are likely to be bombarded with strange, completely unnecessary French translations of all kinds of things. We all know how much the French are obsessed with their own language to the point where they feel other tongues are equivalent to monkeys screeching, but that is not what is going on here. It's not like swarms of wealthy Parisians have invaded all the wealthy enclaves of America to set up their 'bistros' and 'boulangeries'.

No, instead sneaky business owners have discovered some subconscious element of the Anglophone brain that associates hearing French with a rampant desire to throw all of their money away. But come on people, JUST BECAUSE SOMETHING IS TRANSLATED INTO FRENCH DOES NOT MEAN YOU SHOULD PAY MORE FOR IT. In fact, when you see random French words completely unnecessarily thrust onto a store name or menu iteam, you should be extremely suspicious.


Now, I don't speak a lick of French so I'm not in a great position to give examples. But fortunately, my fellow Tight Fister Jake Cooper (who posts as 'Jake' on this blog) has offered to help with some friendly translation. Here we go:

1. In English, "a la carte" means "I hope you already ate, 'cause this ain't coming with any sides or anything." So there's really no reason to bother with a translation, but I will, just because it's so mind-boggling. "A" means "on." And "la carte" means "the menu." Dead serious.

2. Hors d'oeuvres means appetizer, but you have to pay extra for the spell-check.

3. Maitre D isn't even sensical. It means "master of." Master of WHAT?

4. When you see "aubergine" and think it's some exotic French counterpart to the eggplant, you're half right. It is French. It means "eggplant."

5. Soup du jour? Why is this in a conspicuously different language than the rest of the menu, did it get lost? And why is it $6.95 for a cup of friggin' soup? No shit it's soup of the day!