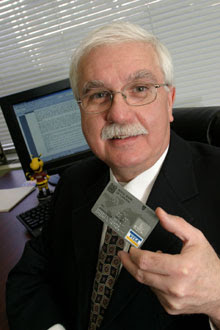 Damn Suits seem to be everywhere these days. In London, they basically own the place, driving up the prices of bars, cafes, and restaurants for a wide radius outside their lair, the City of London. But worst are the Suits who love to jump on planes and ruin things for people in other cities. They flaunt their corporate credit cards without regard for prices, making certain items unaffordable for the rest of us. As a dedicated Tight Fist, you must learn to recognize these items and avoid them at all cost. Here are some examples:

1. Airport Food - With the long trip to the airport and the prospect of a long foodless flight, your time at the airport should be a great opportunity to get a snack and maybe even a beer. But why should airport restaurants serve food for the masses when instead they can defraud corporations of millions via expense accounts? The other day in the Toronto airport I saw a measly piece of 80% water ham stuck in between Wonder Bread for 11 bucks. Highway robbery! Note that certain chains buck this trend and charge standard prices at the airport. Shout out to Pret, Eat, and Boots (all in the UK) for not reaming their customers!

2. Hotel Bars and Restaurants: If you arrive late at night in a new city, sometimes the easiest place to eat is a local hotel as their restaurants are open late. But be careful! Have a close look: Are there any Suits? If so, run away! Any hotel that caters to business travelers is going to bump up those prices for the expense accounts. Remember, Suits LOVE to drink at the hotel because they can just add the drinks to the hotel bill and expense away.

3. Airport Internet - There are certain times when it would be really useful to have internet. Like if you're flying to a new city and you need to figure out how to get to your hostel or maybe your flight has been delayed and you need to alert a friend. And isn't it great that now most airports have WiFi? Just load up the page, connect, and WHAT!?!? 10 BUCKS FOR ONE HOUR! HOLY CRAP! That's right, what could be an extremely useful service is ruined again by the Suits. Quick shout out to Dubai airport for having free Wifi- the last of a dying breed.

4. Taxis - Thanks to Suits, these motor armies crowd the street and cause havoc for cyclists, yet are too expensive for normal people. You might as well just read my full post about stupid taxis.

5. Cell Phone International Roaming - As any good Tight Fist knows, you have to turn off your cell phone (or find a local SIM) as soon as you leave your country. But why does it have to be this way? Surely cell phone carriers could charge a reasonable rate such that normal people would use their phones abroad, thereby increasing their profits. So why don't they? You know, I don't think it takes a genius to figure this one out. IT'S THE SUITS! Since the company pays for the cell phone, they could care less about the roaming charges, making it more profitable for the companies to keep the rates high.