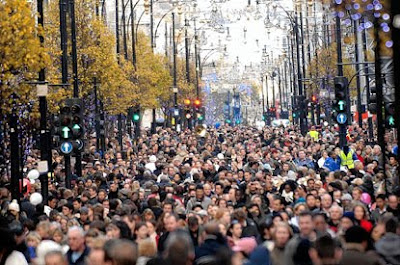 In every major metropolis there's at least one sketchy part of town that most people avoid at all costs. If you're not familiar with the town, there are a few clues that can tip you off at once that you've left your comfort zone. The place is swarming with fiends, and every corner is trying to provide the next fix. You get cold stares from everyone who passes, and get rudely bumped by passer-bys. Overall, you just get an extreme feeling of discomfort, that the inhabitants of this place are nothing like you. The whole place is different, foreign, and scary.

Yes folks there are certain neighborhoods no conscientious human would ever want to go, especially if you are a Tight Fist. In my hometown of Chicago, Michigan Avenue is a place to induce shudders. In New York, Madison Avenue is creepy. And London is filled with sketchy areas: Carnaby Street, New Bond Street, and the scariest place of all: Oxford Street.

See, these places are so scary to a Tight Fist he does not even notice that there are shops. Instead, he just sees crazy mobs of people millings about, doing their best to knock him off his bike. The reason he can't figure out why the hell they are all loitering is because The Tight Fist only knows about two stores: Amazon and Ebay.* These stores sell everything cheaply, and therefore a Tight Fist is unaware that any other stores even exist. Note that advice fits in perfectly with Tight Fist Tip #11, which states that you should never shop at stores that only sell one kind of thing.

You might think that the best way to save money would be to shop around, checking many places to find the best price. This is completely true, but since only two stores exist it's totally easy! Just check Amazon and Ebay! I used to waste tons of time 'shopping around' either online or in stores but eventually realized there was no point. Amazon and Ebay just always have the best prices, and there's no usually no need to even check anywhere else.

To give an idea of how cheap Amazon is, they have recently clashed with manufacturers of goods who complain that since Amazon tends to price their items way below suggested retail prices, it undermines other sales of their products. (I still don't understand this logic.) They even have to rely on a supreme court ruling that makes it so Amazon can't display certain prices because they fall below a certain minimum. (Read about it here. This law is so ridiculous it makes me sick, but it really speaks to how other stores just can't compete with Amazon.)

And yes, I know your complaint: But what if truly need my copy of High School Musical 3 NOW NOW NOW? Well the answer to that is to learn some freaking self-control and get over it. If you're absolutely desperate to have some object right away, this is probably an impulse purchase that you shouldn't be making anyway.

So, is the Tight Fist giving us permission to go on an Amazon/Ebay shopping spree? Um, HAVE YOU LOST YOUR MIND SIR? We all know that no matter what, you still must follow the ultimate Tight Fist rule: DO NOT BUY CRAP YOU DON'T NEED! This rule still stands, and don't forget it. But if you have to buy some crap that you really do need, just go to Amazon and get it over with. Shopping has never been easier.

But one more thing: despite my love for Amazon, the fact remains that Amazon is mostly known as a bookseller, so you might think I am recommending you hit up Amazon for all your literary needs. But actually, as a good Tight Fist you should NEVER buy books on Amazon. I'll tell you why in the next post.

* Note, the following stores get an honorable mention for possible existence: Argos, Wal-Mart, ASDA, Target, and any Dollar Store
Posted by The Tight Fist at 14:30