Epic Feats of Frugality: Thoreau, Walden, and the Simple Life 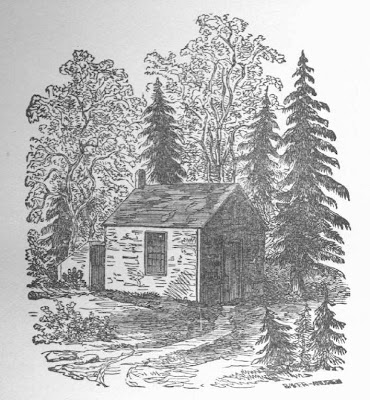 This article is part of the 'Epic Feats of Frugality' series, which calls attention to innovative and inspirational Tight Fisters from around the world.
--------------

Walden, by Henry David Thoreau is a towering classic of American literature. Most people are familiar with the basic story: middle class Thoreau leaves society and goes off to live by himself, extolling the virtues of a simple, natural lifestyle. In the book, he describes his life in the woods and (favorably) compares his life to that of those engaged in modern society. But what may not be completely obvious to you is that Thoreau is a TOTAL LEGEND OF TIGHT FISTEDNESS. If you read the book, you will see that this guy is constantly dropping inspirational nuggets of wisdom that are still relevant to we Tight Fisters today.

Let's start with a perfect example. When Thoreau decides to move to the woods, his first order of business is to build himself a house- everyone needs a house, right? But if you're a true Tight Fister like Thoreau, you cut down your own trees, negotiate with locals for materials, and build that bad boy yourself. In fact, Thoreau was so pleased with his house that he was able to smugly proclaim,"I intend to build me a house which will surpass any on the main street in Concord in grandeur and luxury, as soon as it pleases me as much and will cost me no more than my present one. " Take that, city snobs!

According to Thoreau, one of the major benefits of a simple life is that if you stop consuming luxuries, you no longer need to work hard and long for money. (This concepts has a lot of parallels to the ideas found in our very own Tight Fist Manifesto) In a telling example, there is a passage in the book where Thoreau happens upon a poor but hard-working neighboring farmer, and he tries to open his eyes to the virtues of living without luxury. He illustrates their lifestyle differences in the following passage:

I did not use tea, nor coffee, nor butter, nor milk, nor fresh meat, and so did not have to work to get them; again, as I did not work hard, I did not have to eat hard, and it cost me but a trifle for my food; but as he began with tea, and coffee, and butter, and milk, and beef, he had to work hard to pay for them, and when he had worked hard he had to eat hard again to repair the waste of his system — and so it was as broad as it was long, indeed it was broader than it was long, for he was discontented and wasted his life into the bargain

So obviously the farmer must have seen the error of his ways? But alas, it is not so, as he had fallen under the trap of consumerism: "and yet he had rated it as a gain in coming to America, that here you could get tea, and coffee, and meat every day."

We all know that giving up luxuries will free you from the bonds of money, but Thoreau is takes it to the extreme- giving up even minor luxuries such as tea, coffee, butter, milk, and meat. (And before any snooty vegans chime in, make sure you first take a look at your tofu and tempeh bills.) Sure, Thoreau was lucky enough to be able to go fishing when he wanted a delicious meal, but his restraint is impressive nonetheless.