Ask The Tight Fist: What to Do With A Vain, Messy Housemate 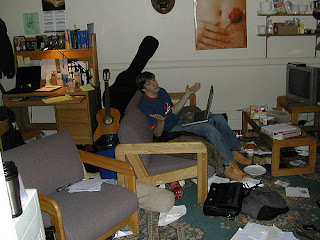 This Man Is Weak, and Can Be Exploited

My housemate is a spendaholic. He has a trust fund, and the thing he loves most in the world is spending money. He buys expensive wine, useless gadgets, clothes he hardly ever wears, and orders out for food. I was puzzled for sometime about, what appeared to me, an inconsistency in his behavior. Even though he spends a considerable amount of money to have "nice things", he leaves trash and boxes all over the house. When I go into the dining room, it is always covered in glasses, plates, take-out containers. I was puzzled, why would someone go through so much trouble to have nice things, and then leave trash everywhere.

I think your readers will be interested in my theory of his behavior. The trash is a reminder of the spending, and that makes him feel good, so he is less inclined to pick it up. Imagine the following scenario; you bring home an attractive girl and the next morning after she has gone you notice she left her knickers on your dresser. You might not be inclined to immediately clean them up. The joy of opening a package only lasts so long. So to draw out the joy of spending, the trash must stick around also as a reminder to him and everyone else of the conquest.

At first glance, this looks like a terrible situation. Not only do you have a classic messy housemate, but his ridiculous spending is likely to make any Tight Fister's blood boil. However, this situation also presents a number of excellent opportunities.

First of all, since your roommate has tons of crap he doesn't need you should have no guilt mooching off of him. I mean, you never know when you're going to want to eat some waffles, wear brand named clothes ironically, or drink a cold beer from your college-branded kegerator. Plus, it's a well known rule of communal living that food left out is open game.

But that still doesn't solve the messiness problem. The way you do this is to convince Mr. Moneybags to hire a maid and have him pay for it. How the hell are you going to do this? Well, you're going to need to exploit the same weakness that causes the trash in the first place. If you roommate needs physical manifestations of his own spending, a maid can certainly provide that. But not just any maid.

What you need is a skanky maid; there are legit companies that provide this service. If your roommate is the kind of guy whose self esteem is so low that he needs to surround himself by tons of expensive crap, he is exactly the kind of guy who will go apeshit over the prospect of getting hot, topless/scantily clad chicks to do his cleaning. "Dude, hot chicks clean my house! That is so rad! All my friends will think I'm such a pimp! This will be even better than the time I bought that Jaegermeister dispenser or my Hugh Hefner pipe!"

Just make up a flyer with some hot chicks on it and he will totally go for it. Also, make sure to take pictures of your chicks cleaning and put them up around the house so he has constant reminders of his conspicuous consumption. It's not exactly in great taste, but it's better than stacks of old pizza boxes.

As for you, having a few extra scantily clad ladies roaming around your house can never be a bad thing. Just make sure they actually clean.